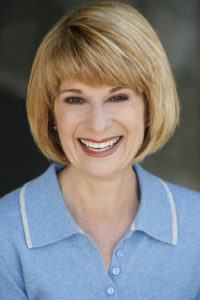 After producing everything from broadcast Talk Shows to Telethons, Mary Windishar has been a full time voice and on-camera talent for the last 15+ years.  Windishar hosted the nationally syndicated PBS show, “Inside China,” for ten years, and hosted fourteen PBS 2008 Olympic Specials.  Mary’s also hosted technology shows for ZDTV, infomercials, and more than 600 live high technology and medical webinars (on24.com clients & UBM clients.) She created and hosted The Parent Club, a radio talk show; plus, Mary has done 100’s of Radio & TV commercials airing both regionally and nationally, and specializes in hosting and narrating industrial films (see talent resume for complete client list).

Her producing experience is instrumental her success as a talent.  Highlights include being Oprah Winfrey’s producer at WJZ-TV, and national producer of PM/Evening Magazine.  Having spent time behind the camera makes Mary very directable, and adds to her expertise as an audio producer, engineer and editor.

Next:  Check out Mary’s demo, or her blog to get a taste of her teaching style.